Jacky Jumps To The Top 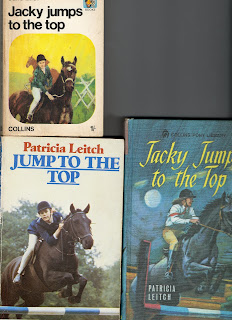 I have finally got round to doing something I have been meaning to do for ages....or at least started to....compare the Spitfire Jane Eliot titles with their Patricia Leitch re-releases.

I started with Jacky Jumps To The top as along with being my favourite Pat Leitch story (apart from Black Loch that is) it is one I read so many times as a child I almost know it word for word so the task was so much easier.

Ever since I obtained my first Spitfire, the elusive Pony Club Camp, I have been wondering if this mini books are are abridged/altered. So far I cannot find evidence of Pony Club Camp ever been re-printed either prior or post the Spitfire edition but Afraid to ride, First pony and of Course Jacky all appeared in the Collins Pony Library series.

However having now read Jacky Jumps to the top in all 3 different editions I can confirm the story was added to for the Collins version quite significantly and further minor abridgements occured in the later armada edition too.

The first thing that immediately struck me was the character Jacky was two years younger (just 9) in the spitfire edition than in the Collins and armada editions. I wonder if, although time did pass during the story, at least a year, Ms Leitch realised it was highly unlikely that a 10/11 year old would beat her peers to the leading junior show jumper title? Also Jacky struck me as extremely capable and independent for such a young age, even when she was 11. Interestingly Celia Grunter remains 10 in all 3 editions, thus going from older than to younger than Jacky.

Flicka also turns from a 4 year old in the Spitfire to a five year old, again I wonder if as an after thought Ms Leitch realised she would be very young to achieve such a feat, and not the best of examples either, competing hard and at a high level, such a young pony?

The text alterations begin at chapter 3 which begins - Jacky covered her head with the bed clothes - she didn't want to wake up. She didn't want it to be today - the day when Flicka and all the other ponies from the riding school were going to the sale at Buckly. In the later editions there an extra two chapters before this bit covering the period up to the sale and Jacky's frantic efforts to make enough money to save Flicka, not to mention Mrs Grunter also trying to buy Flicka for the dreadful Celia. Jacky is offered Flicka for £300 in this build up to the sale (the amount is £30 in the Collins and it is only mentioned as an after thought on sale day).

Chapter 5 of the later editions starts - The clock downstairs chimed half past seven - this is three paragraphs into chapter 3 of the spitfire edition and the story continues as per original for a while (apart from a £50 premium bond win becomes £500 in later eds and Mrs Grunter being prepared to pay £70 for Flicka at the sale becoming £700).Interestingly in the Armada edition there is also one final addition to an otherwise unabridged copy of the Collins. Jacky has no tack and in this edition it mentions her Father making her put her spare £200 into savings and not using it for a saddle, what happens to her change in earlier editions isn't mentioned.

At this point the Collins and Armada have an extra two chapters again which see Flicka jumping out of the Dawson's paddock and gorging herself in the feed room and her resulting bout of colic and another focusing on teaching Flicka to jump and taking part in a disastrous pony club gymkhana.

The two later editions also feature the pairs escapades out hunting, which nearly ruins Flicka's jumping career and occurs just before the try out's for the pony club team, where it all goes wrong! With Roderick's help they get Flicka back on track and from here on in the book is back to following the original storyline published by spitfire and ends with Jacky and Flicka being crowned Leading Junior show jumper Of the Year.

All in all a near perfect pony book, the stuff dreams are made of regardless of the edition you choose!
For me it has to be the armada I had growing up to be honest, much as i like the Collins pony libs......old faves die hard.

One question I would still like the answer to is - Is Patricia Leitch her real name? If so why the pseudonym ?
Posted by haffyfan at 13:14 2 comments:

Nothing to do with pony books or anything in particular for that matter but this has to be one of the loveliest poems I've ever come across and thought i'd share it a little more.
Posted by haffyfan at 13:34 1 comment: