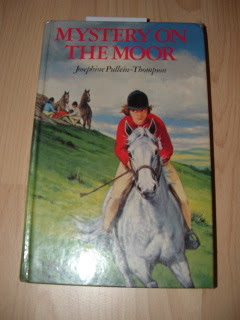 I have this week managed to finally get hold of one of the most sought after pony books of recent times. The extremely elusive Mystery On The Moor. I have been after this one for a few years now and it certainly has a 'hype' around it which I have found on past occasions brings nothing but disappointment on actually reading the story, such as with Sheila Chapman's books and rosette for Royal. Thankfully, this time it wasn't the case!

I also must apologise to someone for this review as I know this title will be covered by The pullein-Thompson archive in just a few weeks time, but I couldn't resist...it's not every day you actually manage to get hold of the most wanted book on your list! I'm hoping you will understand.

The story see's Angela Fletcher return to spend the summer as a paying guest with the Ashworths, meanwhile Jess and her sister Georgie are saying with their Gran, Mrs Hathaway. Once ponies are sorted out for everyone a great summer should be in the offing, but threat of a rabies outbreak is hanging over the country. It is also slightly marred by the fact the cottage on Menacoell, where they so often in the past had camped out, has now been turned into kennels and Mr Bates is far from friendly and won't have them near. A trip to the shops at peennecford is followed by the usual crossing of the estuary to have a gallop in the fields beyond, however this time they are greeted by birds who have been caught up in an oil spill. The friends immediately mount an operation to save the birds and help is at hand from the RSPCA. While this is going on suspicions are raised about Mr Bates and what exactly his business is. Is it as innocent as it seems and what of the rabies outbreaks? Where are they coming from and is it set to spread to the moors.......

I was all set to not like this book a single bit, I hadn't thought much of it's predecessor Treasure on the Moor, thought even less of the following book Suspicion Stalks The Moor and knew this one would be lacking the main characters from the first 5 books. However I can honestly say I enjoyed it as much, if not more than any other book in the series...and considering the times I have been thoroughly disappointed by books I have wanted so desperately it was somewhat refreshing to say the least.

The AsheyPales, as Sukey and Chris were known in Treasure, really come into their own in this book as they take over the main character slots previously filled by Louisa and Frances Burnett. They have turned from feeble city kids, struggling to adapt to their new surroundings into much stronger, dependable and infinitely more likeable characters. SuKey and Huw emerge as the new 'leaders' within the group, a void that is left by the absence of the Burnetts, older Hamilton's and the Jackson's. Danny is now fully integrated and accepted as part of the group and we see the return of the quite frankly 'horrendous' Angela. A pushy, in your face brat who more than meets her equal in the impertinent and downright obnoxious equally spoilt brat Jess. Unlike Jess, Angela has a few moments where she almost manages to redeem herself but Jess is selfish and out for herself through and through. She is also even more dislikable due to her natural ability on horseback...she immediately has the unschooled and difficult Russet going beautifully for her to further irritate the others.The Ashyplaes ponies are new reformed characters due to the help from the Burnetts and Snowman makes an interesting addition to their stable. He is a skinny mass of bones covered in warts who neither of them really want but as Sukey begins to ride him he proves himself to be a wise old hand and super all round performer...there is even a happy ending when his warts disappear!

It leaves me wondering a little whether I would like 'Suspicion' more now, knowing a little more about the characters in it, this book fills a lot of gaps in their personalities that make them appear bland and un endearing in Suspicion.The story itself covers several important issues. Firstly the devasting effects of an oil spill on local wildlife. Josephine didn't just touch lightly on the subject either as we learn about how the birds are to be cared for and how the RSPCA becomes involved. There is also the serious issue of Rabies, now laws and restrictions have changed, I guess smuggling dogs into the country is less necessary but Josephine tackled this issue well and the rabies plot was only brought fully into play at the end of the story...I won't go on and totally spoil it but suspicions were rife prior to this and the missing link falls into place in an unexpected way.............

The only thing I didn't like was the absence of the previous main characters and poor explanations of this in the case of the Burnetts. The Mitchell's had been being fazed out slowly for a while and are no great loss, The Jackson's were busy running their trekking centre and again this had been building up for some time, the older Hamilton's were away with their TV star/producer (I forget which) father, which was plausible but the Burnetts absence was due to their mother being ill and needing to recover in a warmer climate. Hello this is the 1980's, this might have been common in the 40's and 50's but did this really still happen in the 80's? I for one am not so sure but stand to be corrected. I know Josephine didn't want to bring in new characters but was made to by the publishers...I fear it was almost deja vu of the Noel and Henry series as her publishers didn't like the hint of romance between Noel and Henry and you felt a relationship was blossoming here between Frances and Felix too in the same subtle way. Whatever the reasoning the old characters were well and truly dead and buried apart from odd fleeting mention early on in this one.

The book is an enjoyable read with or without the characters of the first books and more than holds it own within the series. It showed her diversity as a writer as she shied away from her usual style of pony based story and embarked on a more adventure/mystery theme with ponies thrown in......maybe it was the what was popular and 'wanted' at the time as the Peter Grey Kit Hunter series and Linda Craig Mysteries by Ann Sheldon all got re-released in the early 1980's too but for me it will never be able to live up to and will always be a poor relative of her earlier classics such as Six Ponies and Pony Club Camp? It may be more sort after than these books but that is purely down to the rarity factor rather than content in my opinion.